A Fortuitous Change of Plans

A Fortuitous Change of Plans 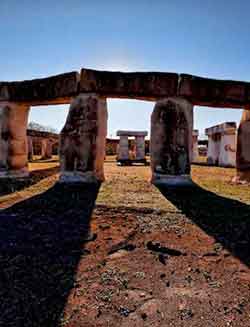 As part of a 2500 mile road trip that took us from Frisco, Texas (where we lived for 9 years before realizing we belonged in Dallas) through New Mexico and Arizona and looping around through El Paso – and then home, we had plans of traveling to Hunt, Texas for purposes photographing Stonehenge II as the last image in Volume I of Texas As I See It.

After spending the night in Las Cruces, New Mexico, we came in through El Paso and made our way to Marfa, having heard all sorts of great things about it. En route we stopped briefly in Valentine to photograph the standpipes. Valentine is a sleepy little town 350 days of the year. But in February the hustle and bustle of activity reaches a fever pitch as thousands of people send mail to be re-posted through the Valentine Post Office. That’s right. You can send a Valentine’s Day card – or letter – or parcel to be re-posted with a Valentine Texas postmark to the love of your life. And apparently a lot of people do this.

Then off to Marfa. This was on Saturday. We planned to spend the night in Marfa and then head off to Hunt the next morning. What we discovered is that lodging in Marfa is mighty pricey. And the only place we liked had no ground level rooms and no elevator. And we had a LOT of luggage and camera equipment. So I took some photos of Marfa and then we headed out to the site between Marfa and Alpine where people go to see the Marfa Lights. It was sunset, so no lights, but we figure it’s probably some drunken farmer with a flashlight and some hubcaps anyway so off to Alpine we go.

Alpine, Texas is a delightful little town with affordable lodging and we liked being there. I got a great shot of the full moon over Cathedral Mountain that is planned for Volume II of Texas As I See It.

Sunday morning we wake up, have breakfast and look up Stonehenge II to get directions. Well, NO. It seems the original landowner died (I knew this already) and the property was sold, so the Hill Country Art Association moved it. End of information. No new destination given. And it’s Sunday, so we aren’t getting any other useful info on this topic.

So we look at the map and plan a trip home, planning on spending the night in Abilene, since it’s a good half-way point.

If you follow our map you’ll see the entire route from El Paso to Frisco with the waypoints labeled. We also stopped in Eastland, Barnhard and McCamey which are not marked because Google Maps only allows for 10 waypoints. Hey Google. Isn’t that a little stingy?

As it turns out, this provided some real opportunities to see small towns and wide open desert along the way.  We have some fascinating geological formations strewn about the uninhabited wastelands of Texas and if you stick to the main highways you’ll never see them.

Along the way we stopped in Barnhart, McCamey, Rowena, Winters and San Angelo before we got to Abilene.

In Abilene we discovered something big was going on and there was not a single non-smoking hotel room to be had. We looked at each other, shrugged and plugged in the most direct route home (Frisco) from Abilene. It was a long drive that day. We got home really late. It was great to be home and sleeping in our own beds after 2 weeks traveling 2500 miles.

And Eastland was along the way. Let’s not forget Eastland.

So while we did not accomplish exactly what we intended to with this trip, we did find a lot of other fascinating thing to capture. Right after Christmas 2011, (after Texas As I See It was published), we took a road trip to San Antonio and timed it to arrive around 3:30 in the afternoon at Ingram Texas where Stonehenge II resides now. This would guarantee long shadows for the dramatic image I had in my mind. This will be the cover for Volume III.

You can order Texas As I See it from our website or pick up a copy from any of our vendors. Refer to our website for both – and a calendar of events we are involved in throughout the year.