This Day in Texas History: Constitutional Convention Meets in Austin

This Day in Texas History: Constitutional Convention Meets in Austin 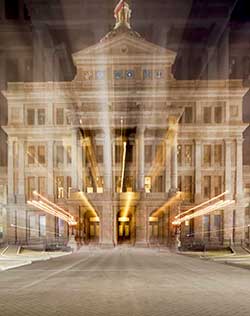 On this day in 1875, the Constitutional Convention of 1875 met in Austin. The convention grew out of the determination of Texas Democrats to eliminate the radical Constitution of 1869. Edward B. Pickett presided over the convention, which adjourned in late November after adopting the new Constitution of 1876 by a vote of fifty-three to eleven. Dissatisfaction with the Constitution of 1869–which forbade slavery, strengthened the office of the governor, and centralized law enforcement–and with the administration of Governor Edmund J. Davis prompted provisions to decentralize the state government. The new constitution placed restrictions on salaries, expenditures, taxes, and the state debt. It also abolished state banks, limited some activities of corporations and railroads, and placed term limits on many public offices. The Constitution of 1876 was approved by the state’s voters in February 1876 and remains the basic organic law of Texas.