This Day in Texas History: Hospital Destroyed In Hurricane

This Day in Texas History: Hospital Destroyed In Hurricane 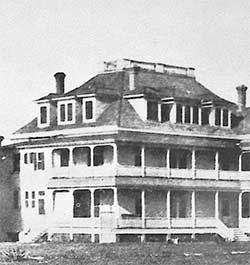 On this day in 1919, the Spohn Hospital in Corpus Christi was demolished by a hurricane in which a nun, two patients, and two employees were killed. Spohn Hospital (originally Spohn Sanitarium), the first hospital in Corpus Christi, is a Catholic institution founded in 1905 by Arthur Edward Spohn. When Spohn moved to Corpus Christi in 1895 and noted the lack of medical facilities, he embarked upon a campaign to raise funds for a hospital. Through the efforts of Alice King Kleberg $6,000 was collected from the residents of Corpus Christi for the project. Her husband, Robert J. Kleberg, prepared a drawing of the proposed sanitarium around 1903. The Sisters of Charity of the Incarnate Word, San Antonio, agreed to staff the new facility. After the 1919 hurricane the hospital was temporarily located in a private home. Henrietta C. King gave the land for the new hospital and it was back in operation by 1923.Through the succeeding years, the hospital continued to expand. In 2003, the CHRISTUS Spohn Health System consisted of six hospitals–three in Corpus Christi and one each in Alice, Beeville, and Kingsville–and thirteen clinics.