This Day in Texas History – Kay and Velma Kimbell Marry

This Day in Texas History – Kay and Velma Kimbell Marry 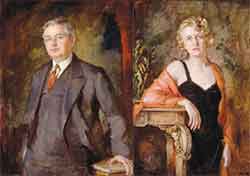 This Day in Texas History

On this day in 1910, Kay Kimbell and Velma Fuller, future benefactors of Fort Worth’s Kimbell Art Museum, married in Durant, Oklahoma. Kay Kimbell was born in 1886 in Leon County and attended public schools in Whitewright, where he met his future wife. At the time of his death in 1964 he was the head of more than seventy corporations, including flour, feed, and oil mills, grocery chains, an insurance company, and a wholesale grocery firm. Velma Fuller Kimbell, born in 1887 in Whitewright, prompted their art collecting in 1931, when she took her husband to an exhibition of old master paintings at the Fort Worth Public Library. Over the years the Kimbells assembled a multimillion-dollar art collection. In his will Kimbell left his fortune and collection to the Kimbell Art Foundation with the directive that a first-class museum be established. Upon his death Mrs. Kimbell generously supported her husband’s plan by contributing her share of the community property to the foundation, making the proposed museum one of the most heavily endowed of the nation’s privately funded art institutions. She turned the first shovel of earth in the groundbreaking ceremonies for the museum in 1969 and continued to take an active part in the museum’s programs and activities after it opened in 1972. She died in 1982.

They are buried in the Oak Hill Cemetery in Whitewright Texas