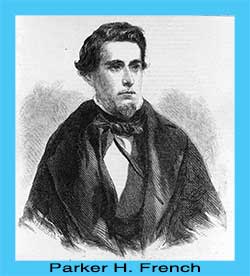 On this day in 1850, the French Expedition to California fell apart at El Paso. The expedition was organized by fraudulent promoter Parker H. French in New York. French promised “fast and safe” passage to the California gold fields for $250 a passenger. A total of 180 passengers and workers signed up; the workers got a discounted fare. The group sailed from New York on May 13, 1850, stopped for a week in New Orleans, and landed at Port Lavaca, Texas. After a difficult overland journey, they arrived at Franklin (El Paso) on September 18. Suspecting fraud, the men mutinied and opened French’s safe, only to find it empty. French escaped across the Rio Grande into Mexico. During the Civil War he was arrested in Connecticut. No record exists of his death.