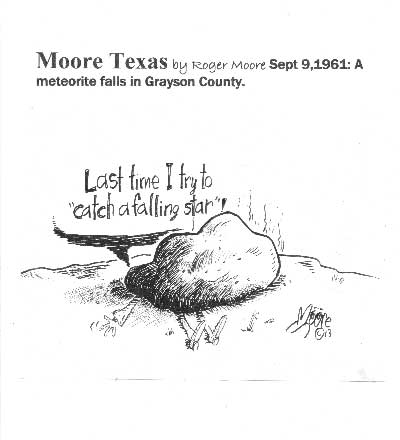 On this day in 1961, at 10:08 P.M., a fireball was seen passing northward through the sky just east of the Fort Worth-Dallas region. It hit the ground near Bells, Grayson County.

Some ten ounces of a very rare carbonaceous chondrite was retrieved from the meteorite over a six-month period. Only about twenty ounces of this substance had been known previously to fall in the world. Texas has had at least nine cases of “falls”–meteorites recovered from a witnessed fireball. By an unusual coincidence, the fall near Bells was the second to occur in Northeast Texas within approximately 100 miles of each other and within a period of a little over 100 days.