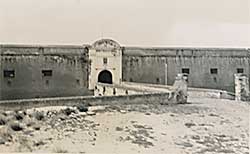 On this day in 1844, Mexican officials released 105 Texans from Perote Prison. The freed men were the last of the captives taken in the Dawson Massacre, the Mier expedition, and the Texan Santa Fe expedition–all episodes in the ongoing strife between the Republic of Texas and a Mexican government that did not acknowledge the legitimacy of that republic. Perote Prison was the jail chosen for Texan survivors of the republic’s battles with Mexico. The stronghold, in the Mexican state of Vera Cruz, was originally a moated castle built to hold treasure bound for Spain and to protect a trade route. It was constructed in the 1770s. The Texans who were held there had surrendered as prisoners of war, but were held simply as prisoners. Nevertheless, they were evidently humanely treated. The Mexican government released the last of them partly as a result of continued pressure from the United States and British governments.