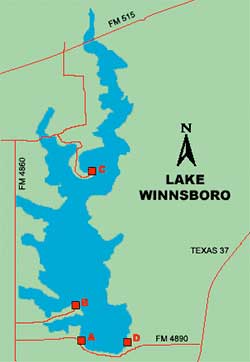 On this day in 1962, whether by accident or design, the dams of two small Wood County lakes were completed. Lake Hawkins and Lake Winnsboro, formed respectively by Wood County Dam No. 3 and Wood County Dam No. 4, were both made for recreational and flood-regulation purposes. Impoundment of water had begun in both lakes the same summer. Lake Hawkins has a surface area of 776 acres; Lake Winnsboro, of 806 acres. The new lakes joined the hundreds of other man-made reservoirs in Texas that provide water for municipal use and irrigation, as well as the the means for fishing, boating, swimming, water skiing, picnicking, and other recreation. Such little county lakes are naturally dwarfed by other impoundments, such as Lake Texoma (89,000 acres) and International Falcon Reservoir (115,400 acres when it rains on the Rio Grande watershed). Though these larger lakes provide some hydroelectric power to the state, Texans have generally been forced to look elsewhere for electricity, since rainfall in Texas is predictably unpredictable.